Resurrections and Resonances- the stories of the Nun’s Book

During my time at the Pitt Rivers I had the opportunity to work with a range of amazing objects from across the collection. My day might range from accessioning Palaeolithic stone tools, to photographing Ecuadorian terracotta votives, to trying to piece together letter fragments from the 19th century found in an ancient Peruvian pot. However, of all these objects and their associated histories, one that struck me the most came in an unlikely form- a 17th century manual on loop braiding, the so-called ‘Nun’s Book’ (2008.67.1). What had begun as a routine exercise in cross-referencing the database, unfolded into a compelling tale of the resurrection of a lost art form and its associated lives. These lives subsequently challenge our preconceptions of historical intimacy and relationships, while also offering an interesting test case in how we might locate ordinary ‘queer’ lives in history. Ultimately, the book attests to the unexpected power and insight that seemingly mundane objects can hold, a tenet that holds true of the museum’s collection as a whole. 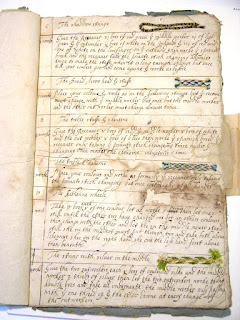 Loop braiding or fingerloop braiding is the name given to a number of techniques where loops of thread, attached to a central point, are hooked around fingers and interlaced in different ways to create braids. This technique was common in Europe through the Medieval and the beginning of the Early Modern period, but the craft appears to have fallen into obscurity from the 17th century onwards. Historical examples of such braids are rare due to the degrading of the textiles through the centuries but a number of manuscripts survive with ‘patterns’ for such braids. The Nun’s Book is one such pattern-book, notable for having surviving examples of braids (figs. 1 & 2) but the book becomes truly unique when you consider the type of braids it contains, letter-braids. These are braids with letters and messages woven into them of which very few examples remain. The technique of creating such braids was all but lost until the pioneering research and analysis of Naomi Speiser and Joy Boutrup. While the Nun’s Book is a pattern book the instructions contained within are incredibly opaque to a modern reader, a series of baffling tables seemingly impenetrable even by experts. However, through in depth analysis of the surviving braids and experimentation, the technique has been cracked, resurrected after more than 200 years and along with it an intriguing glimpse into their original creators and the braids’ potential purposes.

In Appendix I of Speiser & Boutrup (2009) is a list, straightforwardly titled ‘Texts for Letter Braids’, suggestions found within The Nun’s Book and other manuscripts of messages people could weave into their braids. What I found within this list was strange, surprising, and touching. The majority of the texts were deeply affectionate messages directed towards the wearer-

Moreover, we find similar messages suggested in other letter braid manuscripts suggesting that this is not simply a peculiarity of The Nun’s Book but an intended characteristic in the creation of these braids-

My Love in this: Presented is[iv]

These suggest the braids were intended as gifts between close friends or lovers, a memento while the other was absent. A touching piece of history, but the story becomes more intriguing when we realise these were most likely primarily exchanged between women, an interpretation Speiser suggests in her work which is also apparent in some of the suggested messages-

Another aspect worth noting is the emphasis some place on concealment of affection, a notion that the two cannot freely express themselves-

The question then becomes- what was the nature of these relationships? Can we see these as expressing romantic love between two women? Or do these instead show different standards of expressing affection than modern normative conceptions? Are they both? While the lives of the women who created and exchanged these braids are lost and we cannot speak in certainties these grant us a tantalising glimpse into expressions of intimacy between ordinary women of the 17th century. Even without these certainties, it certainly serves as a potential challenge to our preconceptions of this historical period, while also providing us examples of how and where we might locate ‘queer’ lives in history.

Posted by Pitt Rivers Museum Object Collections at 06:07 No comments:

The Collections and Conservation Teams carry out a diverse range of activities to ensure that the objects in the Pitt Rivers Museum collections are cared for and available for study and research. Most of our work takes place behind the scenes; follow this blog to gain an insight into what we do.

Related resources: Search the online objects database or arrange a research visit to study the collection.